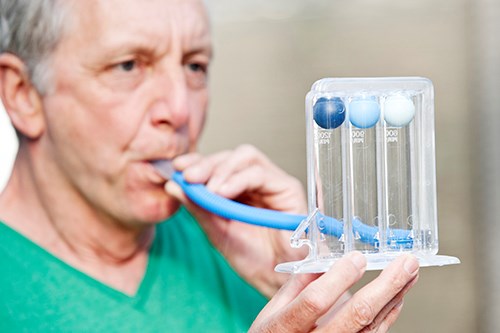 When patients are admitted to the hospital, they sometimes need oxygen to keep their oxygen levels within a normal range. Upon discharge, some patients may need to use oxygen in the short or long term. Respiratory therapists evaluate these patients to determine how much oxygen they may need and why. Some may need it only while resting or sleeping; others may need with activity.

This well-established tool is routinely used to determine a patient’s arterial oxygen saturation and heart rate. For diagnosis and treatment of sleep-disordered breathing, overnight pulse oximetry helps determine the severity of disease and is used as a more economical way to detect sleep apnea.

This pulmonary test assesses lung function to detect early-to-late-stage lung diseases such as asthma, pulmonary fibrosis, cystic fibrosis and Chronic Obstructive Pulmonary Disease (COPD). This physician-ordered, simple test may include a bronchodilator to help analyze whether a breathing medicine can alleviate shortness of breath. A respiratory therapist instructs the patient on breathing while a machine measures lung volumes and flow rates.

Widely used by general medical and surgical patients, incentive spirometry encourages patients to take deep and slow breaths to assist in lung expansion. A device provides visual feedback when patients inhale for a minimum of 1-3 seconds. The primary goal is to increase lung volumes and improve performance of the respiratory muscles so that the entire lung expands.

Many who undergo surgery develop atelectasis (fever and lung collapse) after the first few days due to a combination of pain, lack of a cough reflex and continued shallow breathing. When incentive spirometry is performed regularly after surgery, the smaller airways remain open and lung collapse is prevented.